Who Reckons McDonalds Makes The Best Hamburger In The World?

Whenever I ask this question at the beginning of one of my seminar or convention presentations, it’s hardly a surprise that no one in the audience puts their hands up.

I think it’s fair to say that most of us thinks that Maccas produces a pretty ordinary hamburger….some people might even argue that it’s actually “the worst hamburger” in the world!

Regardless of anyone’s negative opinion on McDonald’s hamburger; they sold over $24 billion in the US last year.

Imagine that you have a product that most people ridicule or at the very least, made jives at – and still sold over $20 billion worth!

So why do you think McDonald’s can make a hamburger that many argue is second-rate and yet make such astronomical sales?

It’s very simply of course, they have brilliant marketing system.

Having a “great operational system” is useless if your marketing is not driving traffic to your business.

When I bring up this subject at events, some people respond by saying “McDonalds sells so many hamburgers because they have a great operational system.”

My response is “it doesn’t matter how good your back-of-house operation system is – if your marketing is crummy and no one is buying from you, you’re going to have an operational system that’s gathering rust!”

Sure, it’s important to have a professional and streamlined operational system in your business – that goes without saying.

But the most important component of any business is undoubtedly its marketing system.

And the lack of such a system is what contributes to so many businesses going broke.

The statistics of businesses failing in Australia are scary – of all businesses that opens this year, only 50% of which will be around in three years’ time.

There may be a number of factors that contribute to most businesses which fails – but my view is that the main contributor to their downfall is their total lack of marketing knowledge.

If you own a business, make sure you place the proper emphasis on learning “marketing skills” more than anything else!

If McDonalds can make a hamburger which many could argue is pretty ordinary, yet sell a gazillion of them, doesn’t that clearly show you the incredible power of effective marketing?

So often I say to business owners “you don’t even need to really have a good product in order to be successful.”

Now don’t get me wrong.

Of course I advocate that you should produce a good product – but the point is that I have personally been involved with providing marketing strategy to businesses that were selling product that I didn’t think were of good value …….but because of my marketing skills, I thought such businesses to sell truckloads of their goods.

Don’t misunderstand me – these products were okay – but they weren’t of the quality that I would personally would seek.

But the bottom line is that with some clever marketing tactics, we were able to position the products as desirable for the relevant target audience – and they sold like hotcakes!

I bet you can think of numerous product and services that you considered were “pretty ordinary,” yet the manufacturer or the distributor sold plenty of them because of the clever marketing.

Gosh, there must be a million case studies of this in the candy, toys and fitness equipment industry? 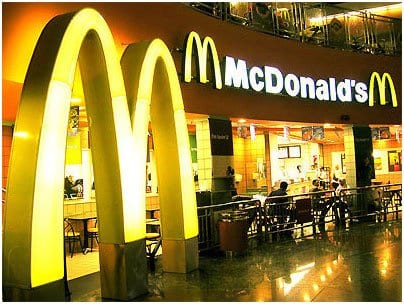 Do you think the home shopping products are top class?

But wait, there is more!

Have a look at any infomercial on morning or midnight TV and you’ll see a whole lot of crap being marketed.

Everything from weight loss programs to wrinkle evaporation cream and gym equipment, much of it being of let say, “questionable quality.”

However, because of the very savvy marketing tactics used by these companies, their call centre phones rings of the hook the moment the TV ad has finished.

I know this for fact because I’ve been involved in marketing lots of these products myself.

Again, it goes to show that the quality of their product doesn’t necessary need to be top class if you have the right marketing system in place.

My mantra is of course prejudiced towards “direct-response” style marketing using problem/solution headlines and plenty of supporting case studies and testimonials.

I call it my Wheel Of Wow formula and I’ve used it for thousands of businesses across thousands of industries.

If you’re a business owner, do yourself a favour and put your “operational menu” aside and place your major focus on creating a “marketing system” that gives you a predictable result. 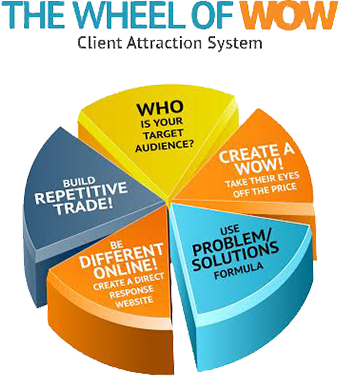